This is the second part of a post in which we have been considering the horse and rider in artefacts in order to develop our sense of the horse’s contemporary significance. In Part 1 Laura Jones examined a particular object type – a padlock in the form of a horse – for which our knowledge mostly derives from metal-detected finds recorded by the Portable Antiquities Scheme (PAS). In this part Rob Webley continues the analysis of PAS records, considering a copper-alloy sheath chape which features a highly intriguing design.

Chapes are metal components which protected the terminal of a scabbard or a sheath, and, ultimately, the owner from accidental damage from their blade. Chapes made of folded sheet metal, and possessing one attachment arm (such as the one shown below), are usually considered to have come from leather sheaths for knives. Beyond their function, a chape could help decorate a sheath, with openwork details interplaying with the colour of the leather beneath for aesthetic effect. Here the focus is on one of the most highly decorated of a group of folded knife sheath chapes, as on one face a horse and rider are depicted (see image below, to right). 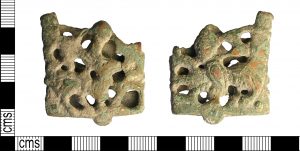 Although these chapes from knife sheaths, being folded, featured two faces which could be decorated, only this single type seems to have borne two different designs. Recently classified by museum officer and researcher Ben Bishop (2020) within his Class D, we will concern ourselves only with the face that shows a knight on a horse, the other face having been subject to various interpretations. In the following description of the knightly scene my own interpretation is offered: even on the clearest example of such a chape, found at Angel Court in the City of London, the features may be construed in different ways. This interpretation is shown in the coloured image below: the knight has a pointed helmet, carries a kite-shaped shield on their left arm and wears protective clothing – possibly a gambeson (a padded jacket) – which is visible below the shield. In their right hand they hold a battle axe, the shaft of which rests on their shoulder. The horse’s forelegs rest on the ground such that the rider’s feet virtually touch the ground. I have emphasised the horse’s harness, with the reins held by the rider in their left hand and with both a breast- and rear-band attached to the saddle to give it stability. This is a different interpretation to those who have suggested that marks on the horse’s flanks might represent a caparison (protective cloth covering) – a point to which we will return. 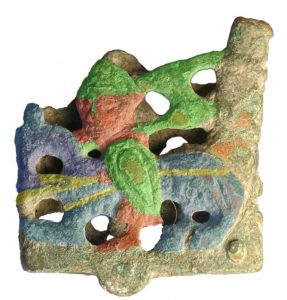 Interpretation of the design of a medieval sheath chape (PAS: SUSS-03FD90) (Image courtesy of the Portable Antiquities Scheme)

Regardless of the precise details shown on these chapes, the fundamentals present a puzzle regarding its dating and the intriguing knightly depiction. Dating this type of chape is made more difficult by the fact that none of the over 40 examples known has been found in a stratified context. A small clue is offered by the terminal of the Angel Court chape, the only surviving arm terminal for this group. It is sub-oval with a bifid end (i.e. split in two parts) and can be paralleled by terminals present on examples of Bishop Class A chapes which can be tentatively dated to the first half of the 12th century. Such dating may be compared with the internal evidence of the chape itself which depicts attire typical of an 11th- to 12th-century knight, as seen, for example, on the Bayeux Tapestry (c. 1070s) or the Winchester Bible (c. 1160/1170s). Of the elements depicted, it is arguably the kite-shaped shield that is the most diagnostic of date, with its rounded top suggesting a date before the mid-12th century. Taking the strands of evidence together, I would favour a date in the early 12th century for these chapes, though various of the elements depicted admittedly do not provide such precise dating, being plausibly slightly earlier or later.

At first glance, an early 12th-century date does not sit perfectly with two particular elements described: the possible caparison and the battle axe. Iconographic evidence places the advent of the caparison (or cloth trapper) in the 1140s, based on its depiction on the seal of Simon de Senlis, Count of Huntingdon and Northampton. However, their conspicuous absence from seals until the end of the 12th century, if not later, suggests two options: that caparisons were more common earlier than we thought, or that something else is shown by these engraved lines – patterns on the horse’s hair (elsewhere, punched dots might show dappling). The battle axe might seem a typically 11th-century weapon were it not for mention of one in Henry of Huntingdon’s description of the Battle of Lincoln (1141), right at the end of the first half of the 12th century. The axe is arguably the most striking part of the ensemble, and makes this an atypical knightly depiction. The medieval military historian David Nicolle (2011, 39) has speculated that these chapes might have belonged to returning English Varangian guards, but their quantity might mitigate against this suggestion (see also map, below). Overall, the arguments constructed regarding the dating and depictions on these chapes represent but one interpretation, naturally open to challenge – if everything was straightforward it would not be so fun! 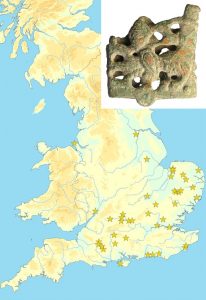 The distribution of these chapes may be contrasted with the padlocks discussed in Part 1 as the chapes are a strongly southern phenomenon, and notably absent in the north of the country. In part, this may be put down to the use of knives with sheaths furnished with chapes which, based on current recording of surviving examples, seems to be a more southerly feature overall. On the other hand, in the 12th century this depiction of elite equestrianism may have been more culturally legible in the south of the country. Taken together, the objects discussed in this post offer new insights into perceptions of medieval horses and riders, though how ‘popular’ (as opposed to elite) they were would benefit from further work, as well as more examples found in context!