Each year in October, the free-roaming ponies on Dartmoor are rounded up by the farmers to whom they belong, and the foals born that year are sold at auction in the village of Chagford. This event is interesting from the standpoint of equestrian history. Those ponies are called ‘Dartmoor Hill’, meaning that they are born on the moor, and must not be confused with the Dartmoor breed. Dartmoor Hill ponies are a mix of many breeds of horses, introduced to Dartmoor over the centuries, including Shetlands used for mining in the 19th century. 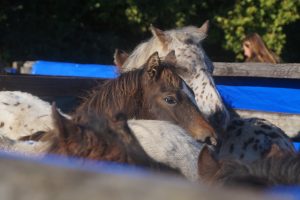 Keeping horses in semi-managed conditions is a traditional way of equine husbandry. In the Middle Ages, horses were already kept on Dartmoor in that manner.[1] References to this way of managing equids are found in Jordanus Rufus’s De medicina equorum (c. 1250), one of the foundational texts for equine medicine and husbandry in medieval Western Europe: he advises that foals should be born in the mountains and left to roam freely for the first two or three years of their life because, according to him, grass and freedom are what is best for their health. 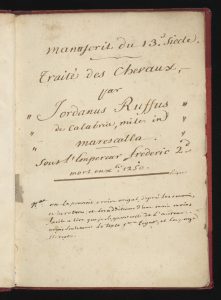 The colts are then rounded up to be taken back to the studs. There, they are tamed and broken in. Rufus gives some advice on how to capture the colts (describing, for instance, the material of the rope used to lasso them), but nothing is said about the handling of the horses or the number of people involved. This silence is no doubt due to the fact that the rounding-up and sorting out of the horses was so common and so well-known at the time that there was no point in mentioning it. Rufus was addressing himself to knowledgeable horsemen, so he only wrote down techniques and advice that were unusual at the time or the results of his own experimentations. The handling of wild[2] animals was not part of that.

A traditional event with possible medieval roots, such as the Chagford Drift sale, can provide interesting insights into the practicalities of rounding up and sorting out the horses. As a historian, it is easy to focus exclusively on textual sources. Yet, in the case of human/animal relationships, many aspects are experienced and lived and are not (or cannot) be put in writing. Therefore, when attempting to understand the relationship between humans and horses in history, contact with and observation of the animals can fill in some of the gaps in the written sources. 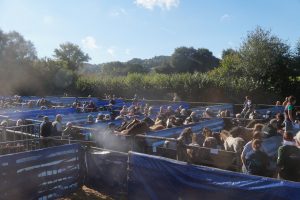 During the sale, the herding of the horses was done through a succession of corrals, with minimal physical contact between the humans and animals. The horses’ instincts as herd animals appeared to be used as they were moved as groups. When humans intervened, body language was important. When the horses were touched, it was on specific areas such as the rump. Short, loud vocal cues were used to encourage the horses. Some of the handlers were brusquer, handing out small punches on the rumps of reluctant horses, while others hardly touched the animals. 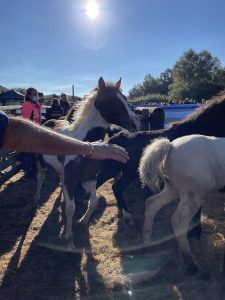 Interestingly, the handling of the horse appeared to be mostly male dominated, perhaps due to the very traditional aspect of the sale, and even though women were in charge of the organisational aspect. Children, mostly boys, also participated in the handling, hinting at the generational transmission of those techniques, probably through a process of observation and mimesis. It echoes what is hinted at in Rufus’s method: the parts on which he is silent imply that they were already transmitted, either orally or non-verbally through the process of observation. As such, they did not need to be written down. Even today, no instruction manual on how to handle wild ponies exist; it is knowledge that is actively used and passed on to the next generation and it will disappear once this chain is broken.

[2] Wild here refers to the horses’ experience with human interaction. Despite being mostly left to their own devices, the ponies on Dartmoor are domesticated animals and not, in fact, wild.

2 thoughts on “Thoughts on the Chagford drift sale”