An empty shop opposite Princesshay in Exeter city centre might seem an unlikely place to see the AHRC Warhorse team sharing their enthusiasm for the project, but a Saturday in late September witnessed this location transformed into a ‘Pop-Up Curiosity Shop of Science and Culture’  by Agile Rabbit in which members of the public could engage for free with demonstrations, talks and activities. Styled the ‘Maketank Gallery’, the space was transformed into a veritable research bazaar on Thursday afternoon, with stalls and displays showcasing cutting-edge work, ready for Saturday’s main event.

Public outreach is integral to our project, and the Covid crisis has presented some major obstacles with our planned activities over the last 18 months, although we did take advantage of digital methods of delivery to organise training workshops that were covered in an earlier blog. The Pop-Up Shop provided us with a fabulous opportunity to showcase our project, its team and some of our findings and activities to members of a very diverse public. We produced a table-top exhibition from which we delivered ‘show and tell’ activities throughout the day to a great range of visitors, from shoppers opportunistically popping in, to some formidable specialists on all things horsey…

Our stall presented an array of materials covering different aspects of our work — particularly horse bones and equine material culture. The public were particularly drawn to — and sometimes mystified by — the horse bits, and really enjoyed handling our collection of horse bones, including a skull. A fragment of fused horse spine — the condition known as ‘bamboo spine’ — from the Department of Archaeology’s collections  drew some gasps as members of the public realised the damage that carrying heavy loads could wreak on an equine body. 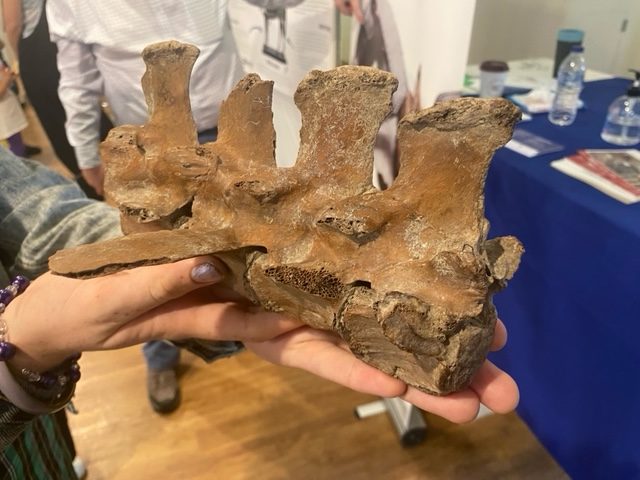 A fused horses spine from an archaeological context. Many people commented on the pain the horse must have felt: “really gruesome but really interesting” in the words of one young visitor.

A ‘design your own horse harness pendant’ kit proved an instant hit with Exeter’s younger folk, with many producing their own heraldic designs and hearing strange words such as ‘tincture’ and ‘argent’ for the first time! 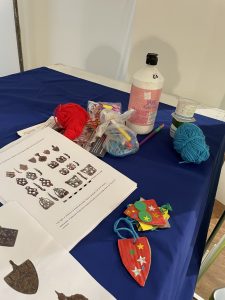 The ever-popular ‘make your own horse pendant’ kit, aimed at children.

One of the most engaging questions we posed members of the public was to guesstimate how tall a medieval warhorse would have been. With the help of a special horse measuring tape, marked out in hands, we were able to draw on the results presented in our soon-to-be-published paper in The International Journal of Osteoarchaeology to show how medieval horses were far smaller than the Shire horse-sized beasts of popular imagination. “I had no idea a medieval warhorse could be so small; it’s fascinating to hear that historical films can get it so badly wrong!” proclaimed one enlightened visitor. Another commented on how interesting it was to hear about archaeologists “hunting down the mythical beast” that is the medieval warhorse.

One of the most exciting aspects of our project’s development is the way that the research team has grown to encompass students at different stages of their journeys, and it was excellent to see current University of Exeter students who had carried out research on warhorses as part of their studies join in alongside our doctoral students, post-doctoral research staff and investigators.

Overall, the event attracted well in excess of 300 members of the public and proved a fabulous showcase for our work. We sincerely hope that we are able to seize on similar opportunities in the future. 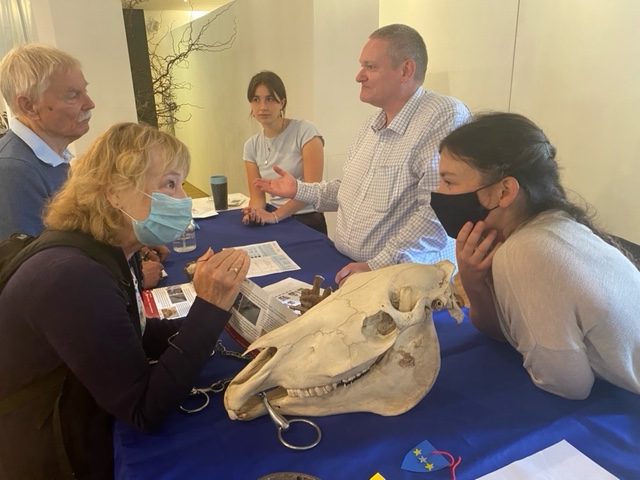 Members of the warhorse project team talking with some engaged members of the public at the pop-up exhibition stand.