In this latest post, Dr Gary Baker explains the equine organisation within the royal household.

Much of what has been written on king’s horses in medieval England has focussed upon the royal studs: the locations in which the monarch’s warhorses of the future were bred. What is often neglected is the other part of the royal equine network: the horses within the royal household. The relative lack of scholarship on the royal household horses is important, because it was the royal household into which the horses bred in the king’s studs were sent, used either as mounts for the king and his inner-most associates or else requisitioned for use in the household’s myriad of departments. Also, whilst the studs provided warhorses for the king for the most part, some of these animals deemed unfit for war were used by the various household departments as pack horses, messengers’ horses, or everyday riding horses.

The royal household on the move. Horses were used for a variety of purposes in the household such as riding, baggage, for messengers, and pulling important persons, as here

The organisation of the royal household in the early fourteenth century was laid out in a household ordinance of 1318. The ordinance specified five great offices of the household: the steward, the keeper of the wardrobe, the chamberlain, the controller, and the cofferer. The king’s horses appear within the Marshalsea, a ‘sub-department’ under the jurisdiction of the keeper of the wardrobe, who acted as the household’s treasurer. The Marshalsea (not to be confused with the Marshalsea Court which administered justice in the household and twelve miles around the itinerant household as it moved around the country) was staffed by several senior officials, each with specified functions related to the maintenance and care of the king’s horses. There was the chief clerk, whose job was to account for the spending of the chief purveyor of the avenary, the latter of which was charged with obtaining foodstuffs and other goods for the horses. The day-to-day care of the horses was supervised by two sergeants known as harbingers, each with a deputy, and three sergeant-marshals. 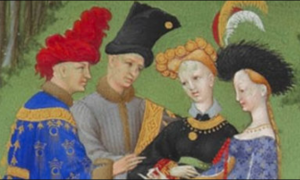 The medieval household was a vibrant place, with many courtiers and officials present at any one time

The 1318 ordinance does not provide the names of any of these equine officials, but we can identify a good number of them by looking at near-contemporary wardrobe accounts. The wardrobe book of Roger de Waltham, Keeper of the king’s wardrobe for 1 May 1322 – 19 October 1323, is a perfect example in this regard. Members of the royal household were provided with an annual allowances for clothes (robes) and shoes, with senior members of the household entitled to allowances twice-annually in winter and summer. Waltham’s 1322–23 account, which straddles three of Edward II’s regnal years (15–17), therefore covers the payment of garment allowances in the summer of 1322, and the winter and summer of 1323, and lists by name members of the royal household in receipt of these allowances. From these lists we can name virtually all the members of the royal equine establishment at this time.

Senior officials of the Marshalsea in receipt of allowances for robes, 1322-23

In the summer of 1323, for example, the wardrobe book names 32 carters in receipt of an allowance to buy shoes. These men worked throughout the household’s various departments along with 85 valets, sumptermen, palfreymen, and keepers of the horses of the king in the household’s stables . These 85 men are listed within the departments in which they worked, such as one man managing the pantry’s horse and another the banquet hall’s horse; beasts most likely used to carry the various equipment of those departments. The allowances for robes are even more revealing, as they also name several senior equine officials. The chief clerk of the Marshalsea at the time was Simon Eycote; Maurice Drageheved was the sergeant of the palfreys; Master John Gilmyn the marshal of the horses; John Mildenhale was senior farrier; Giles de Toulouse, was keeper of ‘certain horses of the king within the household’; Hugh de Beaurepaire, was keeper of certain of the king’s horses outside the court (extra curiam); and John de Reading, was sergeant and harbinger of the sumpters and carthorses. In addition to these senior officials the lists of those in receipt of robes also name 4 purveyors, 2 harbingers, and 5 farriers, along with 30 sumptermen working in diverse other departments. Unfortunately no overall totals for the number of horses in the household is provided, but historians have argued that since each groom was usually in charge of one horse, there could well have been anywhere between 100 and 200 horses present at any one time; a combination of the king’s warhorses and also the various horses required for baggage, messengers, and transporting the household’s people and goods round the country. 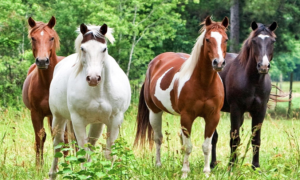 Horses were bred in the royal studs and probably looked mean, like this lot!

At this stage the external network of the king’s studs was also accounted for in the wardrobe (it would later do so at the exchequer). In 1322–23 we can thus see the external stud network operating in parallel to that of the household. The aforementioned Hugh de Beaurepaire received £344 9s 7½d for the period 1 May 1322 – 7 July 1323 for his wages and the upkeep of an unspecified combination of 40 destriers, coursers, and other horses at the royal stable at Reading, and another £71 1s 10d for keeping 30 horses, again at Reading, from 8 July to 19 October. At the same time the royal southern studs were in the custody of Brother John de Redemere, a Dominican friar. Redemere received £210 1s 1d for his wages and for those of various stable hands, and the costs of keeping 4 stallions, 23 mares, and 41 foals at Woodstock; 2 stallions and 24 mares at Cornbury; 2 stallions, 19 mares, and 6 colts at Risborough; 32 colts at Odiham; and 4 stallions, 71 mares and 26 colts at Rayleigh (254 animals in total), and an unspecified number at Windsor, from 1 May 1322 – 7 July 1323. In the north, first Richard de Merksale (9 January – 20 March 1323), and then John de Neusom (20 March – 19 October), received £253 10s 5d for their expenses, wages, and the wages of John de Derlington (Darlington), Marshal of the horses, one farrier, and other valet’s and pages, keeping 28 of the king’s ‘great horses and a lesser number of other horses’ in Yorkshire.

Whilst this is only a snap-shot in time it should hopefully show that there was more to the royal equine administration than the horses in the king’s studs, and as the household grew so too did the number of horses required for its personnel and baggage. The royal household on the move, with hundreds of people and animals on the move must, therefore, have been a very impressive sight.