In this blog post, Dr Gary Baker shows how the documents for England’s royal warhorses can be used to show us what they looked like.

One of the most interesting facets of English medieval documents concerning royal horses is that many of them provide details of what the animals looked like in terms of their colouration and distinguishing marks. This is information that is often sorely lacking for medieval people and shows just how important horses were in the medieval world.

The colouration of horses is revealed by their names. In English medieval documents concerning royal warhorses (all of which were male), the naming practice is always the same. A horse’s “forename” was its coat colour expressed as a Latin or French noun. There were around ten to fifteen types, of which bausan (white spots on a coloured ground), bay/badius/bayard (bay), ferrandus (iron-grey), grisel (grey), morel (shiny black), lyard (very small spots of white on grey, or vice-versa, giving a silver-grey appearance), and sorel (chestnut) were the most common. The horse’s “surname” is either that of the former owner (surname or title) or the place from whence the horse came either by birth or purchase. Occasionally a further description is appended, describing some other physical characteristic. This is most often related to the coloration of the feet or head if it differed from the rest of the animal (like a white nose), but it can also refer to some other corporeal trait like a docked tail.

A typical list of the names of the royal horses

To provide an example of how historians can use this information, let us take a small sample size from the accounts of John Waterton, Master of the Horse (the chief officer in charge of equine matters) under Henry V. The most prevalent coat colour for the royal horses in Waterton’s account for 1414–16 was “lyard”, or silvery-grey horses. Of the 233 horses in the Master’s care over these two years, ninety-eight were silver-greys with the second most common being bays at fifty-five. If we include the silver-greys with horses described simply as “greys” (grissel) this number rises to 117, or half of all the king’s horses in the account. 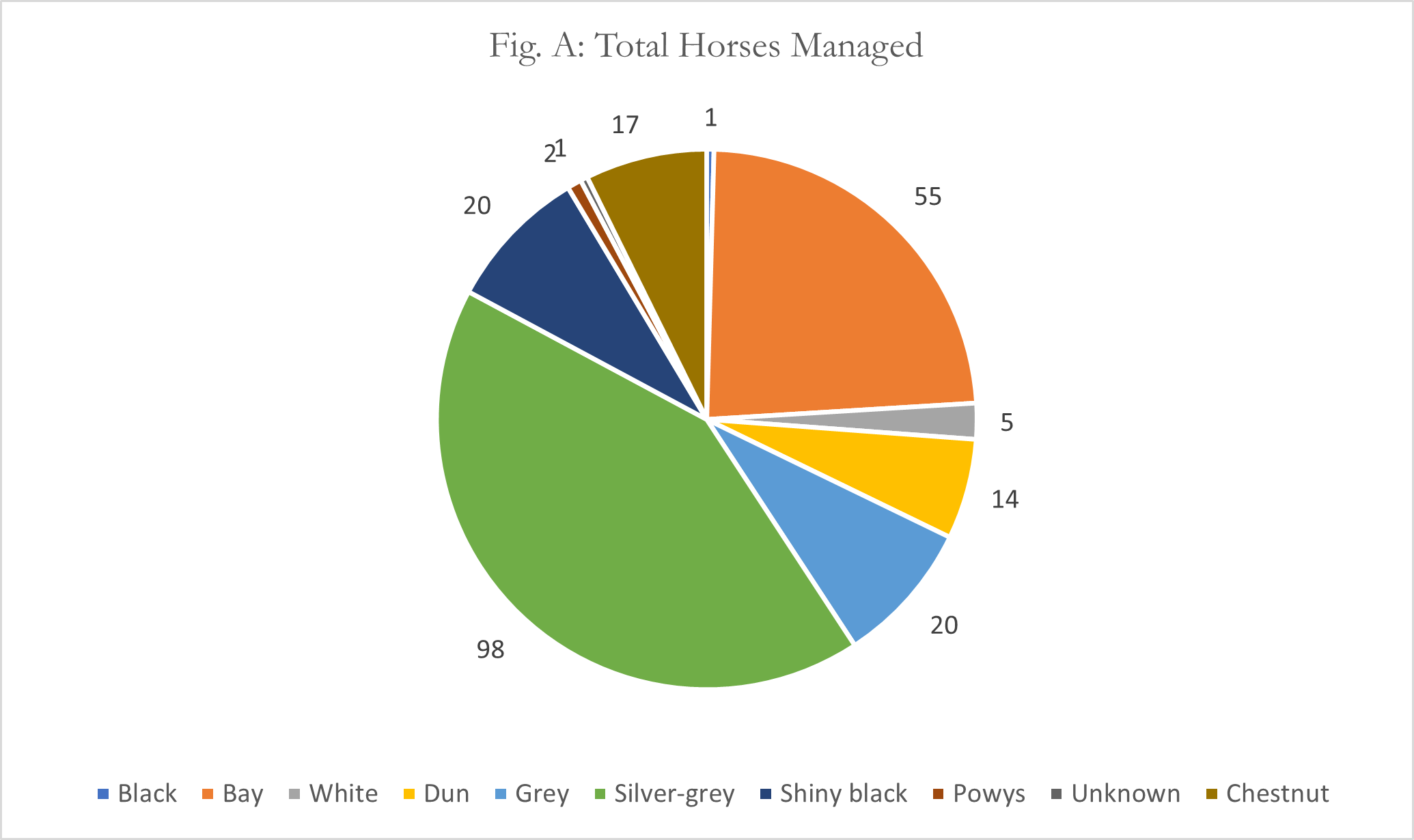 Interestingly, a good proportion of equine literature produced in Western Europe during the Middle Ages had a good deal to say about the conformation and personality desired in the “ideal horse,” including warhorses, and many also remarked on desirable coat colours. One of the most influential medieval works was De medicina equorum (c.1250–56) by the Italian knight Jordanus Rufus which survives in numerous contemporary copies in several languages. In one of these French, or rather Occitan copies, Lo libre de la marescalcia des cavals, dating from the late fifteenth century, now in the Bibliothèque Municipale in Fréjus, France, “Rufus” states that there are so many different opinions about the optimal coat colours that it was not worth discussing them all. This is illustrated by divergences at this point of the text in several of the French versions of Rufus’s work, where the copyists express their own opinion as to the optimal colour for a “good” horse. For example, the Fréjus MS says that bay is the preferred colour over all others while a copy in Reims by François du Tronchoy, Livre de la cure et garde des chevaux (1390) states that bay and grey are the most advantageous. The evidence from Waterton’s account of the predominance of gifts of bays and especially greys made to, and by Henry V, constituting 109 out the 135 received by the king (80 per cent) and thirty-five of the fifty-two given away (67 per cent), suggests that ideas of equine colour preferences, or at least the prestige of animals of these colours, had taken root by the time of Agincourt. It is telling, for example, that the famous image of Sir Geoffrey Luttrell mounted on horseback in the Luttrell Psalter (c.1325–40) shows Geoffrey mounted on a dappled grey warhorse. 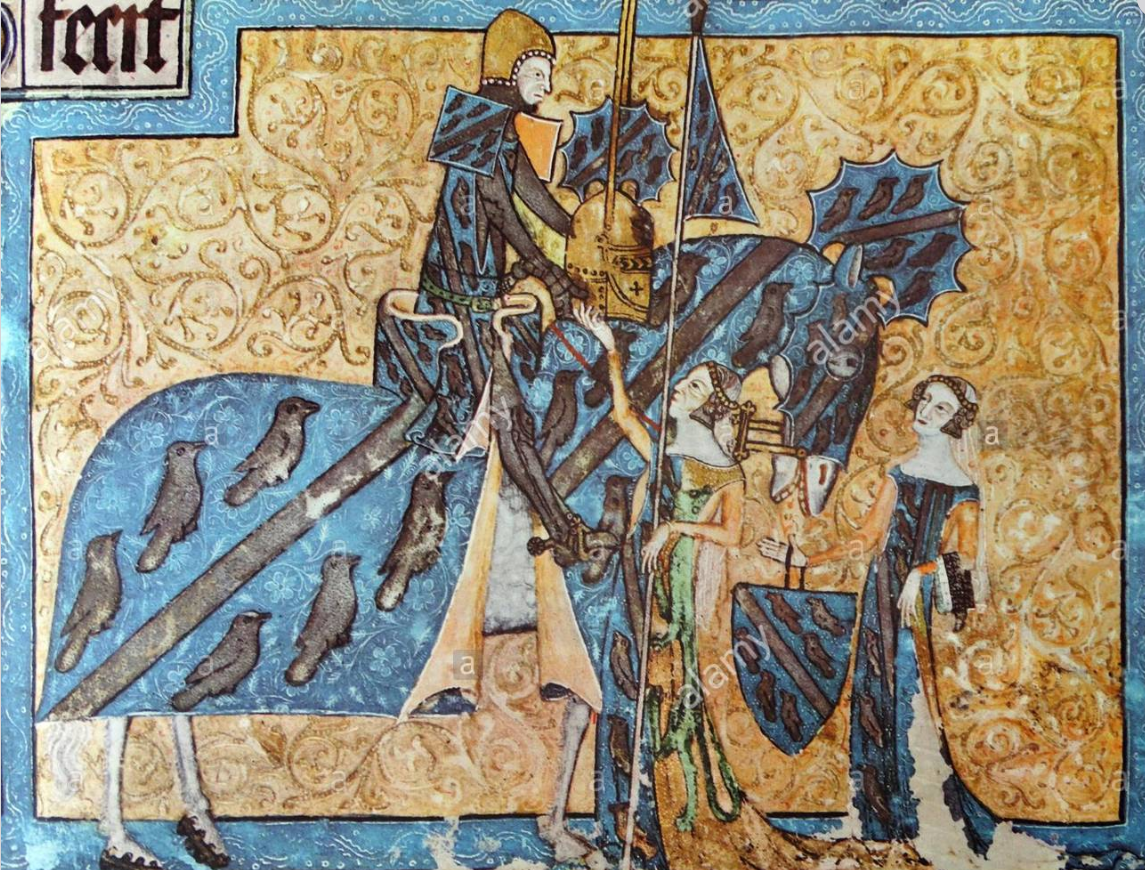