In an effort to further understand how medieval and Tudor horses were husbanded and utilised, and as a good excuse to enjoy the glorious spring weather, the Warhorse team recently visited some of the earliest stables built in England that are still standing. Though largely post-medieval in date, the stables at Kenilworth Castle, Warwickshire, and Dunster Castle, Somerset, can provide details to flesh out what the archaeological and historical records cannot.

Prof Alan Outram and Prof Oliver (Ollie) Creighton were accompanied by myself, Helene Benkert (PhD student), and Tess Townend (MSc student). Alan and Ollie’s deep knowledge of medieval castles, horses, and their archaeology was augmented by our practical experience working with horses in a variety of equestrian disciplines in many kinds of stables. My professional equestrian background is primarily in polo, where large numbers of horses have to be fed, tacked, exercised and competed in sensible ways from a labour standpoint that respects the needs of equine athletes. I have co-authored educational materials for new horse owners on how to house and manage horses (Brady, Kanne, and Russell 2002a, 2002b). The organisation of medieval stables is familiar to modern equestrians that deal with how to best manage working horses used on a daily basis.

Kenilworth Castle was built as a Norman stronghold and modified over many centuries to form a spectacular residence (Fig. 1). The stables now standing (Fig. 2) were originally built by John Dudley, Duke of Northumberland and Master of the Horse of Edward VI, in 1553, at a cost of £4110, likely on the site of earlier stables. After John Dudley’s execution, his son Robert Dudley, Earl of Leicester, made additional improvements to the stables, also called Lord Leicester’s Stables. Like his father before him, Robert was the Master of Horse for the monarch, in this case Elizabeth I, with whom he had a special relationship. 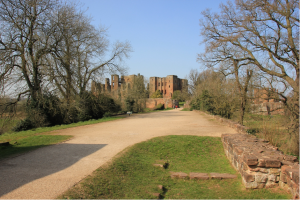 Fig. 1. Kenilworth Castle with the tiltyard for jousting in the foreground. Photo by Helene Benkert. 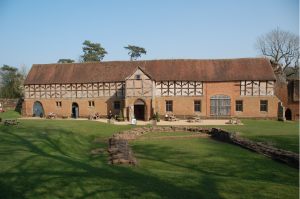 Dunster Castle was constructed shortly after the Norman conquest by William de Mohun, initially as a fortress of earth and timber. The Luttrell family purchased the castle in 1376 and created the standing mansion in the early 17th century (Fig. 3). Stables are known from the 16th century, although the impressive example that can be seen at Dunster today was built in the 1660s, as confirmed by dendrochronological (tree-ring) analysis of oak beams that replaced those destroyed in the Civil War (Howard et al. 2003). Situated within a two-storey barn, the stalls date from the late 18th and early 19th century. In 1925, the Maharaja of Jodhpur visited Dunster Castle to play polo (Fig. 4), with a string of 62 ponies that were stabled there, with a groom for each pony. A video was made of the event (link here). 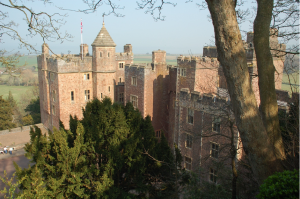 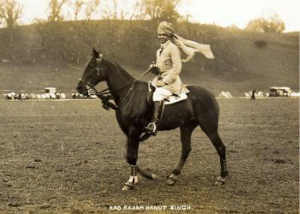 Tie, or standing, stalls were the norm until very recently for working horses around the world, including royal stables such as the Royal Mews at Buckingham Palace (Figs. 5 and 6). They require less space than box stalls, with the typical rule-of-thumb being 4-5 ft wide x 9-10 ft long for average sized modern horses (15-15.2 hh) (Fehr et al. 1993), and require less labour to muck out each day. Bedding would have likely been straw, like at the 1920s Royal Mews below (Fig. 5). Tie stalls make much sense to house the riding horses on the castle grounds, both for residents and visitors. They still are used in polo and military stables as they are useful to ensure each horse receives the correct ration of feed for its workload and body condition, and are handy for horses that may be used every day, repeatedly throughout the day, or at a moment’s notice, quickly available for grooming and tacking up. 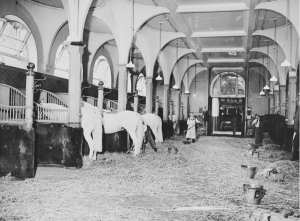 Horses generally can lie down in them despite that they are often termed ‘standing’ stalls. They can either stand facing the wall with a hay rack or manger along the wall, like at Dunster (Fig. 6), tied to the wall usually with a rope and weight pulley system, and/or be cross-tied after feeding at the front of the stall facing the aisle as shown in Figs. 5 and 6 above. Though horses can fight when stabled next to one and other, especially stallions, solid partitions, or half-solid/half-barred partitions, can be erected between them, as at the Royal Mews. Jordanus Rufus (13th century author of a horse treatise) describes that colts in training were stabled, hobbled, and tied to the manger on straw bedding. Another agricultural treatise by Pietro de Crescenzi (13th-14th century author) says there should be wooden partitions between horses to decrease fighting when stalled. Some of the incisors (front teeth) of horses from several of the castles covered by the Warhorse project’s zooarchaeological work show damage from regularly eating from a hard manger, cribbing (crib-biting), fighting between bars on adjacent stalls, or maybe even from repeatedly rubbing bars out of boredom (Fig. 7). 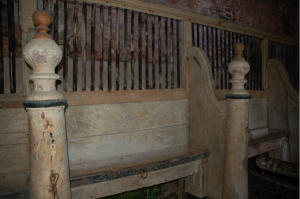 Fig. 7. Hay rack and feed manger at Dunster Castle, with some gnawing damage visible along the manger’s edge. Photo by Oliver Creighton. 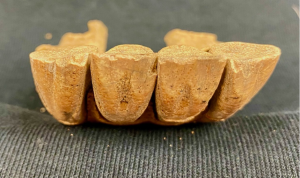 Fig. 8. Damaged lower incisors from Elverton, Westminster. Enamel is worn smooth on the front of the teeth. Photo by Kate Kanne.

Box stalls, or loose boxes, on the other hand, take double or more of the width of standing stalls, and are less efficient to muck and more costly in terms of bedding. The norm for many horses now, they allow more room for each horse to move and rest, including escape from difficult neighbours. They are better for foaling mares and mare-foal pairs, individualised veterinary care, and for horses that have limited turnout (time loose out of doors), though daily turnout is always best. Tie stalls are used now for horses that are brought in to feed and work each day, with ample turnout otherwise. Medieval horses were used daily for everything from transport to war, and had to be ready to go at a moment’s notice, especially those of the nobility. No one likes having to catch horses in a hurry in a field, as they may not feel the same pressure to comply with your demands!

The earliest historical record describes Kenilworth’s stables as 180 ft long by 21 ft wide in 1563, with 30 ‘rooms’ for great horses, and 20 rooms for geldings (Chirk Survey 1563). Given the size of the building as it stands today, about 49 m long by 10 m wide, these numbers can be accommodated in a number of configurations, but likely with mostly tie stalls, on both long walls, a few box stalls, and a wide aisle between (6 ft minimum is the modern standard, 10 ft is common – the one at Kenilworth could have been up to 12 ft wide). A hayloft and quarters on a second storey were also likely, with the team spotting what could have been used to drop down hay from the hay loft (Fig. 9). 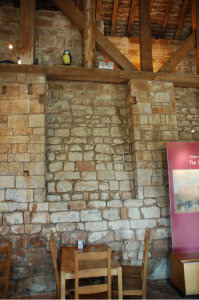 A smaller, earlier 14/15th-century stable building was found under Kenilworth stables during excavations in 1970-84 (Howard et al. 2006). Robert Dudley shortened his father’s original stable, probably by one bay on the north end. During later excavations for the visitors’ centre at Kenilworth, evidence of the earlier building in the same area was also found, with the later medieval building similar in ground plan to the current standing structure, including a paved floor with drainage (Ellis 1995: 114). Based on this, Ellis concluded that the horses were kept in stalls facing the curtain wall and suggested that they would have potentially been 2 m wide to accommodate 25 stalls within the stable.

At Dunster, much of the original configuration is still standing, with the portion that is occupied by the gift shop added later. It has a single row of tie stalls facing the wall with hay racks and mangers in place and a good visible drain (Fig. 10). There are different configurations of stone from where the horses stood to the aisle to increase drainage, and horse comfort. The floor at Kenilworth is currently stone, but a line of demarcation around the base of the interior may indicate that plank wood flooring was used there, which is known for other stables for royal horses. 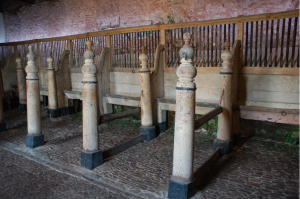 Historical accounts from the 14th-century list the number of horses that medieval castles could house, from six to 779(!) during battles (Colvin et al. 1963; Roberts 2002). Temporary stabling, or simply tying horses to quickly erected hitching posts, would be necessary for castles in the active throws of battle or siege. Kenilworth is the largest known stables, but comparable to those at other high-status sites of the 16th century, like those at New Hall, Essex, and at Reading, Berkshire (Colvin et al. 1982: 173, 221).

Barnard Castle, Durham, with Saxon-17th century occupation, has had 6 different stables identified by archaeological and historical records, including 2 buildings in the Inner Ward and four in the Outer Ward (Little, Long, Palfrey, and Great). This corresponds well to the large number of horse bones reported at Barnard, especially in the later period (Austin 2007:590). Barnard Castle was also home to the royal herd of the Beauchamp stud. In 1325-1326, according to the records of the keepers of horse, and not including riding animals of the castle residents, the herd comprised two stallions, 35 mares and 50 colts and fillies under the age of two (Austin 2007:105-6). The multiple stables could suggest that the value, type, or utility of said horses would dictate where, or if, they were stabled, as breeding and youngstock were generally kept in the parks (on pasture). Potentially, there were different stables for the castle residents, visitors, breeding stallions, and/or foaling mares of the royal herd, or it may be that additional stables were added through the life of the castle as horse breeding increased at Barnard through time.

What have we learned about medieval stables?

Medieval stables were well and purposefully built, matching and exceeding modern requirements of stall space per horse and aisle width. They appear to be designed for the working horses of the castles, and for those owned by visiting guests. Though generally built for the convenience of people, medieval stables also account for the comfort of horses. The builders of the stables at Kenilworth and Dunster were experienced horsemen; they kept in mind that the equine inhabitants were very valuable and necessary for daily life of medieval castles, and designed the stables as such.

Austin, D. 2007. Acts of Perception: A Study of Barnard Castle in Teesdale, Volume 1 and 2. Durham: The Architectural and Archaeological Society of Durham and Northumberland.

Ellis, P. 1995. The Elizabethan Gardens and Leicester’s Stables at Kenilworth Castle, Transactions of the Birmingham and Warwickshire Archaeological Society 99:81-116.